Looks like the fallout isn’t exclusive to Shezzer and John, but jeez, i think this one is even more bizarre than anything the Invasion have done. People say the Church of Scientology is hard to escape from, but they have nothing on Lethal Dose Radio: 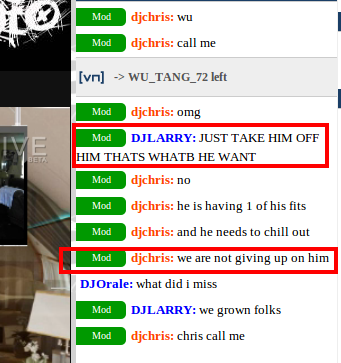 Wow, poor Wu_Tang, all he wants to do is escape the train wreck that is LDR, but Chris is holding on to him tight like a mother would her baby. Chris (Mod_security) has always been known as a bit strange, especially from the SexyChris days, but this is scary. The guy want’s to leave, asks politely to remove his name from the line up and that’s that.

Chris is so desperate, he even posts his telephone number online in the hope of pursuading  Wu to stay.

I know these guys are struggling, but man, this is just desperation.
Who will be next to want out? My money is on Ben 🙂

One Thought to “Lethal Dose Radio: You Will Not Leave Us!”