After his last cast and it’s shenanigans, Shez and Dicky seem to be under the impression that they were willing to apologise for their past and make friends again, like you used to do when you was about 13 and fell out with your mates over who won the football match or something.

Now i’ve gone over and over the video of his cast and not once has he or Dicky even admitted what they have done, never mind apologised for any of it. All he keeps repeating is ‘ lets just forget it all’
Hmm, ok, lets take a closer look at the situation here. First off, we’ll have some ‘evidence’ of Shez and Dick saying just such thing, because we all know now that Shez wants ‘evidence’ 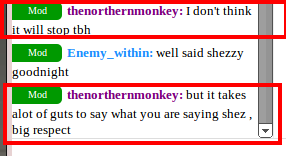 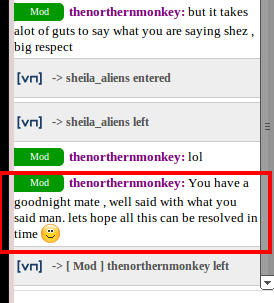 Ok, just what did he do that took guts? Did he want to just ‘forget it all’ when his friends and him were:

1 – Repeatedly sending password reset requests like 60 -70 times an night to Boo, Griff, Neal, Angie and Soultrain?
2 – Sending email after email to Miss Scruffy over a picture that was obvious to anyone except them, that it was a tongue in cheek photo to get us banned from Vaughn?
3 – Using Soultrain_ account on Vaughn to go in peoples casts to cause trouble, in the hope of getting him banned?
4 – Using Boo’s children’s names and my daughters names as usernames on Vaughn?
5 – John giving out addresses, then them actually registering an account using those addresses?
6 – Hounding Andy off Vaughn and then Uvlog?
7 – Having their Youtube channel closed down for posting offensive video’s?
8 –  Watching Soutrains casts in the hope he was going to drop dead after a heart scare?
9 – Abusing Shazjb just because she was friends with Andy?
10 – Banning anybody that did nothing more than talk to us, or come in our channels?

Or did this ‘lets just forget it all’ idea suddenly come to light now they are realising that they made a huge fook up and that the blog and myself are going nowhere, and they can’t censor peoples real views of them 😉

So to sum it up, Dickster was correct…nope, it’s not going to stop or close.

3 Thoughts to “Shez Jackson: At Least I Had The Balls To Try”