Hmmm, he’s lost it you’re probably thinking! Well not me, but our mentally troubled Shez (using the alias gingernutz, as you will see later) got himself so angry and worked up during Dicky’s cast the other night, he came out with what must be the most strange claim in the history of the UK Invasion: 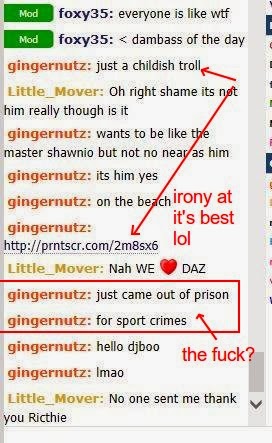 So Soultrain’s just come out of prison for sport crimes? They must have good Internet speeds in this prison and plenty of webcams, in fact, this prison must look just like Soultrain’s home, as nothing looked different on his last cast, what a cool prison, i wanna go there 🙂

Apart from the irony of Shez calling Soultrain a childish troll, then posting a link to his poor attempt at photoshop, just what the hell is a sport crime?

Seriously Shez mate, you need to take a break from the Internet, it’s getting you too angry and full of hate, you can almost picture him sat up in his completely green attic, losing his mind, shouting obscenities at the monitor and smashing his keyboard lol.

One Thought to “Prison For Playing Sport….”