It’s time to feature our resident ‘hacker’ from Coventry again. For those who didn’t see the first attempt, where the gorp used his real IP, here it is below: 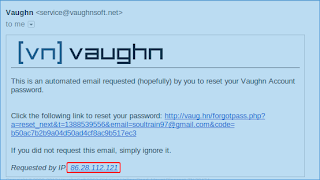 Once he realised he had dropped a bigger bollock than is NorthernMonkey, he swiftly went and used a VPN in Dallas, USA as shown in the 62 attempts at hacking the user and password overnight:

But this is a retard we are dealing with here, an amateur in all levels of life who know’s about VPN’s what Enemy_within knows about standing straight. What he didn’t realise is, when he first visited this blog, he did so in his home IP, so even though he is now using the VPN to try 62 attempts at hacking the password:

It will always show his original IP, no matter what VPN or Proxy he uses in the future, as seen below:

These screenshots have also now been passed on to Virgin Media as in relation to their already active investigation: