Like i’ve been saying, nobody seems to have ever seen Calival, either in real life, or even on cam, which is strange considering how long she spends on Cam/casting sites. Well after receiving Val’s ‘selfie’ Orale repeatedly asked her to go live and cast….now i know i should of butted in and told him there’s absolute zero chance of Val showing herself on camera, but i thought it would be more fun to see how she got out of this one… 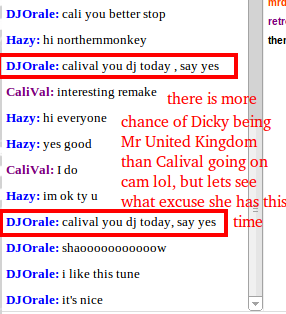 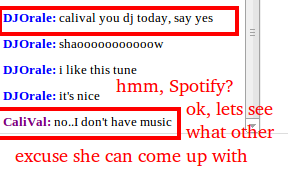 Hmm, ‘i don’t have music’…that doesn’t wash anymore because you can just do what SexyChris, Scotty and lots of others do and use Spotify, just enter what songs you want to play, or what genre etc and away you go.

So Orale offers to sort her some music, then oops, she’s suddenly go to work. Ok, you say, work comes first, maybe another time eh. So off she goes, logs out to head of to work, then 10 mins later: 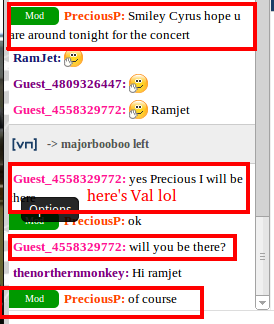 Now i can’t decide if she thinks people are so dumb, they won’t clock her answering a question, when she’s supposed to have gone work, or she’s just totally nuts? Anyway, one thing is for sure, CaliCyrus is about as straight as a ten bob note!

One Thought to “I’ve Got No Music…lol”