Well well well, looks like Justin Bieber has been a silly boy again. This time telling racist jokes and insulting black people all over the world. 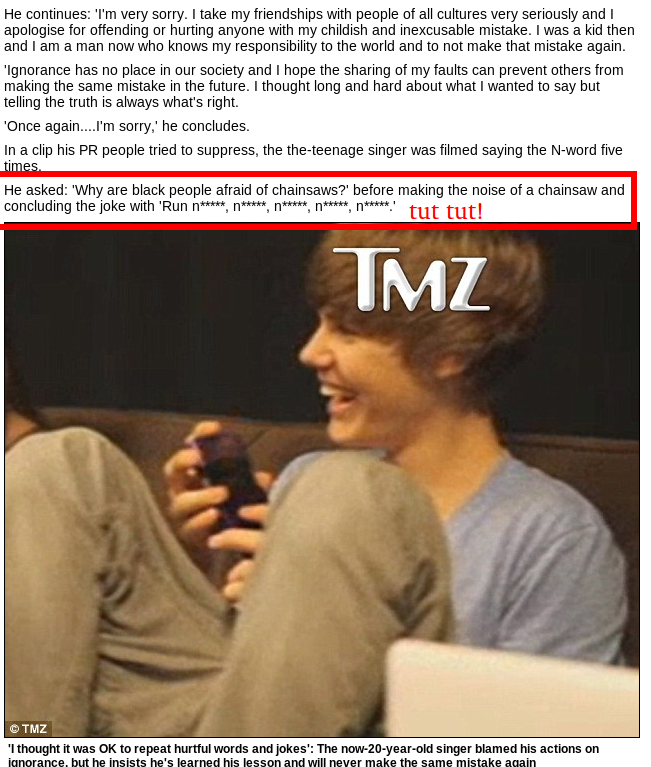 Now this is going to be interesting. After all the ranting he did about somebody saying eat some pork and how racist and disgusting they are, i wonder what his view is going to be about this?

We all know CaliVal aka Smiley_cyrus aka CrackheadKimmy (along with dozens of others) faps over Bieber. Until now, Shez and Dicky have always played her some, obviously still fooled by the profile pics lol. But with them both throwing a hissy fit over the mention of pork, i wonder if he’s going to risk upsetting Val by refusing to play any songs from a racist, or does racism only exist if it’s aimed at Shez, therefore giving into the lust of a fake profile and continuing to play his tracks?

EDIT: Here is the link to the full story:  http://www.dailymail.co.uk/tvshowbiz/article-2645588/Justin-Bieber-apologises-reckless-immature-mistake-used-N-word-offensive-joke-leaked-online.html