I always thought DJOrale was an alright dude till tonight. This guy used to cast for NextCut and we used to support him, then, for whatever reason, he left that channel and moved to Lethal Dose Radio.

Then because Angie2013 was featured, he got butthurt real bad, saying how the fook can the vodka nurse be featured ( i guess ahead of him)

See, this guy’s so dumb, he can’t tell the difference between a nurse and a nun? Then Shezzer pipes up, and when i say up, i mean literally up Orales’s ass: 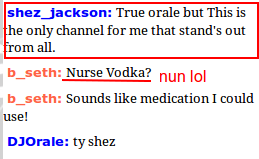 Then Orale hinted at Shez casting on that channel. 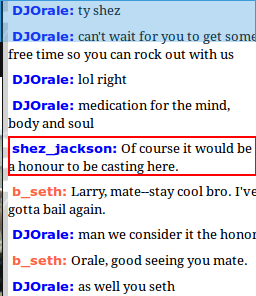 Oh wait, does this mean Dicky, John, Ryan and Enema have now been dumped? Has Shezzer ‘moved on’ from the muppets and found new buddies?

This is gonna be fun guy’s 🙂