Up pop’s NorthernMonkey once again to prove me wrong. Remember last year when Dicky and Enema_within were creaming themselves, convinced they had my IP on Hankslounge? They were convinced i was on Sky broadband, which considering the past history Sky and myself have, would be a miracle, and somehow i ‘forgot’ to turn my VPN on.

Well tonight, i thought, lets have a little play with virgin boy on his Ivlog channel: 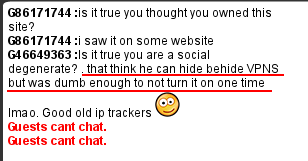 There you go, still convinced they had my Sky IP and that i had forgot to turn it on lol. Only script kiddies ‘turn’ on a VPN, everyone else sets a script to disconnect all traffic if your VPN goes down, hence, your original IP can never be revealed.

But then we are talking about Rotherham’s retard here, i mean, even he couldn’t forget to ‘turn’ his VPN on could he….or could he?? 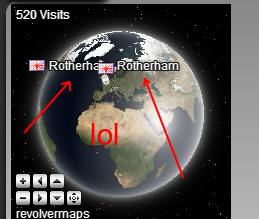 Well, would you believe that, his revolvermaps IP tracker he has installed at the bottom of his Ivlog channel, seems to show he did forget lol.

Dickster, shout me up and i’ll teach you how to use the t’internet one day, free of charge.