Last night was one of those nights where the trolls were out in force, especially in Shez’ channel. As usual, we get the blame lol, although Shez should know that if i troll, i’ll let them know it me.

Anyway, the cast starts off so well and peaceful, so much so, if you didn’t know Shez, you would swear he was actually a nice guy.

Then somebody posts this and credit to Shez, he actually tells his mods not to ban the guests. 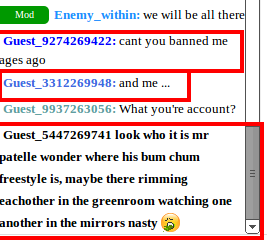