Now that most people have seen them for what they are, the collective group of nutters that are also known as the UK Invasion have started to accept the fact that not many people want to go to view their cast’s anymore, as the dwindling numbers each cast prove.

As usual though, it’s never their fault, it is the time of the year, or the weather’s fault, or SexyChrisWhile25’s fault for having the cheek to cast…

But to be fair, we should of all realised it’s Vaughn’s fault that not 1 person went in to watch Scotty74 when he just happened to cast in the UK Invasion channel, as explained here by the Greek God of Love himself, Tricky Dicky (thenorthernmonkey)… 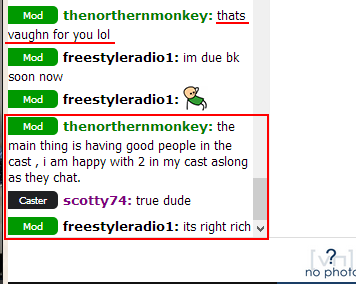 Even my 89yr old Gran, god bless her, know’s that Scotty is the best caster left in there, but when it comes to that channel, people seem to avoid it like you’d avoid a big stinking pile of dog sh*t on the pavement.

But the most telling thing about their demise is the fact they are now more than happy to sit and cast with only 2 viewers….as long as they chat of course 😉

So that’s John and Ryan in, talking the most deluded bullsh*t you’re ever likely to come across and they are happy….

Oh how the mighty have fallen!