After the alleged attempted murder in Salisbury recently, where it was claimed that Russian double-agent Sergei Skripal and his daughter were “highly likely” poisoned on the orders of Vladimir Putin, we were warned by our ‘honest’ Government that a cyber attack was imminent.

Could it be that Russia bypassed Theresa May and the National Grid, our water supplies and other easy targets,  and instead, went straight to the top and targeted the UK’s nation’s treasure, Jimmy Rizzo?

Or what is the Vaughns?

Or was it a case of what too much Stella can do to your brain?

So, did Mark or Scruffy try to hack Jimmy’s VL account, despite having full control of it from the backend anyway?

Or were Russia trying to hit the UK hard by attempting to silence Rizzo?

Or, has the Stella rotted Jimbo’s brain to such an extent, that he would show less side effects if Putin pumped novichok through every window and air vent Jimmy has at his home?

I’m not a gambling man, but if i were forced to place a wager, i’d say… 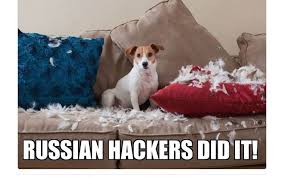 2 Thoughts to “Rizzo Hacked? Was It The Vaughns Or Russia?”