When the majority of us have come to realize that social casting is dead and are enjoying other forms of entertainment in life, it appears that poor Daniel just can’t bear to let go.

Remember, Daniel is adamant that he never visits here (LOL) because we are all ‘terrorists’ who should be put in jail.

Which is ironic, coming from a man that is despised by most casters out there for being what some might describe as a coward and bully.

Now we already know that this is a man who is a control freak. A man who thinks a diet is cutting down to 8 burgers and fries a day. A man, who it seems, doesn’t like black people too.

Below is a screencap of Daniel missing us so much now that we don’t give him a seconds thought, that he came over to try and spam our chat…without a VPN. 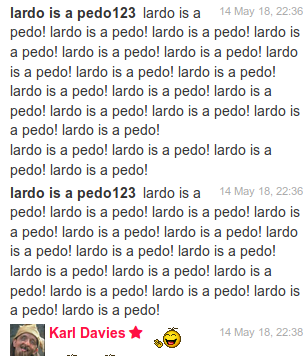 Daniel calling his once close ally a Paedophile is nothing new. He’s admitted previously that he did the exact same thing when they weren’t too scared to open their chat to anybody other than Mods.

But, it wasn’t Lardo is a pedo that he was trying to post. I just censored the real words he was typing, to show in public as ‘Lardo is a pedo’.

What poor Danny didn’t realise, that the backend of our chat, show’s me exactly what was being typed before the censor publishes what you see above. 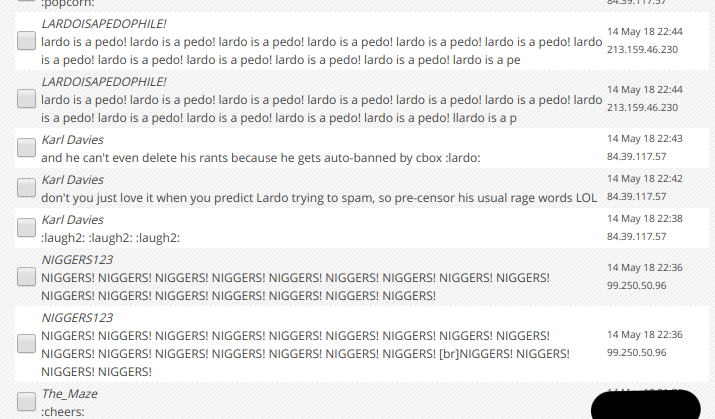 There you have it, in black and white, that Daniel likes to post racist comments about black people.

How do i know it’s Monkeysniffer?

Well, although i can’t say 100%, i think the fact that the IP address: 99.250.50.96 which comes back as being in Ontario, the ISP being Rogers Cable, and the IP being very close to his previous two IP addresses, i feel confident in saying it’s Danny boy.

So, next time he attacks you, claiming some moral high ground, be sure to remind him of his documented fixation with extremely young girls, and his racist views.

2 Thoughts to “Monkeysniffer – The Racist That Is Desperate For Attention”