Not something you’ll often hear me say this, but yes, i 100 per cent agree with MeNellie.

This is a post in the chat from Nellie recently: 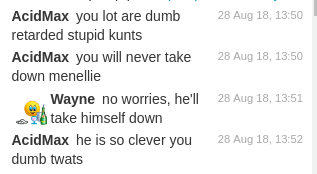 And Wayne was also spot on here.

Nellie realised that i could be watching, so muted the rest of the Discord call, and that was that.

But notice how Nellie is blaming Rizzo for his new found buddies disowning him?

I suppose it will be our fault too.

Only problem is, i don’t recall Rizzo or ourselves forcing or coercing MeNellie to cam up and say he wants to have sex with 13 year old girls, or blackmailing him in to publicly broadcasting that he prefers to kiss children rather than men.

But just like Chris, it’s always somebody else’s fault. They are always the victim.

This is nothing new with MeNellie though.

As Gregg pointed out, this is not just a recent ‘give me attention’ stunt by Nelly:

See how this is a worrying trend?

3 Thoughts to “MeNellie: You’ll Never Take Me Down”