She’s the latest female caster with the no nonsense attitude, and luckily for us guys, a body to match.

She’s Sisterofsatan, the most recent export from New Zealand. And she certainly doesn’t hold back for anyone. Especially when Alvaro tries a little bit of IM sex.

Poor Alvaro, he never has much luck does he?

Well if that’s a sacrifice, i’ll be more than happy to take one for the lads.

Although he doesn’t seem too happy with her offer: 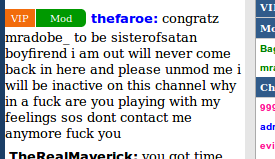 Looks like any chance of the Faroe Islands entering New Zealand have just gone up in smoke.

So now Faroe has threw in the white towel and Alvaro has perved himself into a ban, who will be next to try and seduce the Sister? 5 Thoughts to “Sisterofsatan: This Is For You Faroe”